Writer’s block. You may heard of it. You may have lived it. The words alone might fill you with dread. You may wake up from nightmares about The Awful Writer’s Block of Overwhelming Pain with tears streaming down your face and panic lodged in your throat. Um… Maybe that one’s just me.

I don’t have all the answers, but I DO have some experience with TAWBOP and I thought I might share.

Almost seven years ago, I went through a series of Major Life Events which created emotional upheaval, stress, disruption, stress, destruction of my faith in the goodness of humankind, stress, financial peril, and did I mention stress? Yeah, some stress, too. We don’t need to go into the details, but suffice it to say that the MLE involved pretty much all the big life stressors wrapped into one big ball of uncertainty.

And I stopped writing. For years. And I do mean YEARS. Nearly six years, which is a Really Long Time Not to Write. Major case of TAWBOP.

It felt like death. Like the death of all my creativity. I couldn’t access any of it. I couldn’t remember any joy I’d ever taken in putting words on paper. I couldn’t imagine having enough spare emotion and energy to bring something to life.

I would sit and try to write. I might bang out a sentence before I’d just look at the cursor taunting me with its blinks.

In all fairness, let me rephrase that: everything I could possibly give was already being given to myself and to my kids, to get us through these MLE with our lives, hearts, and selves whole.

So…when I phrase it like that, you might think, “Good job, Sarah! You were right! It was more important to take care of those Real People than it was to write about Fictional People! You did a great job meeting the Real Needs of the Moment!”

I see that now.

At the time, though, I added a pile of extra pressure and anger onto TAWBOP. I was furious that I wasn’t writing. I talked to myself in all those ways one should not talk to oneself: I was lazy, I was a failure, I’d never write again, I wasn’t a real writer. The more angry I was with myself, the more TAWBOP grew, like a monster fed by my own hatred.

I didn’t have six whole years of Hellacious Stress. The real crux of the MLE tormented me for about a year–and even that year had bright moments shining like sun spots. However, that year drained something from me for so long that TAWBOP stuck around, poking me with its cleaver-sharp claws and gnashing its gnarled teeth.

Now. To be clear: TAWBOP is different than the moments when you fight for every word. TAWBOP doesn’t mean you think what you write sucks and will need a lot of editing. TAWBOP doesn’t mean you’re tired or unmotivated. All writers experience these moments and we all know that the best way out is through–just keep swimming, just bang out the words even when they are halting and slow.

TAWBOP sucked the very life-energy from my creative soul. It was a blankness so complete that it had no end. And my anger over not writing fed TAWBOP’s soul, fanned its flames higher.

So. How did I banish TAWBOP?

Second, after listening to myself say all that stuff for, well, for years, I thought: okay, if writing doesn’t matter and it would be okay to never, ever publish anything, maybe I should see if there is any bit of joy in it. Maybe if I write something that’s totally different. Something where I’m out of my comfort zone. Something with no real point.

At that point, I entered a writing contest–a totally different type of contest than

anything I’d done. I needed that external push (I PAID to be in this contest and there were REAL deadlines) and I needed to do something completely new. For this contest, each writer received a genre, a subject, and a character. We then had a very limited time to write and a very short word count to use. My first prompt was: historical fiction, protest, and a narcissist. WHAT? What was this? Wow…this was… kind of fun. I’d never write anything like that if left to my own devices. And I wrote it… This… Hmmm…

Yup. The joy in writing. That’s when it re-emerged.

And you know what? TAWBOP can’t stand when you’re joyful about writing. 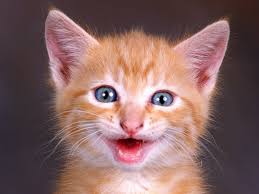 I know my journey is just that: my journey. Might not be helpful to you, if you’re feeling the claws and teeth of TAWBOP.

But…maybe try to be more gentle with yourself. Maybe trust yourself, that you’re guarding your energy for a reason. Maybe be as nice to yourself as you would be to this ADORABLE HAPPY KITTEN.

And maybe, just maybe try writing something completely different than what you’ve ever written? If you write romance, try a thriller. If you write sci-fi, try a choose your own adventure. I dunno. Do something crazy. See if you might find your way into the joy and banish TAWBOP for good.

*Also known as the Blog Entry of Random Capitalization, BERC for short.